Tonight, for the second consecutive presidential cycle, Barack Hussein Obama has been elected President of these United States. After a hard fought election against former Governor Willard “Mitt” Romney and withstanding an obstructionist Congress led by Kentucky’s Mitch McConnell who infamously said, “”The single most important thing we want to achieve is for President Obama to be a one-term president.” Unfortunately Mitch McConnell may know the lyrics to “My Old Kentucky Home” but he knows nothing about the results of political grandstanding and how this nation views her youthful President. 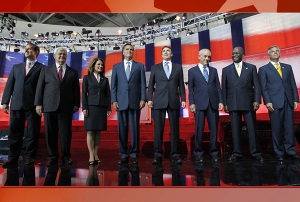 We’ve endured a right-wing nut job (Santorum), a clueless philosopher (Gingrich), an effortless liar (Bachmann), a flip-flopper (Romney), a lonesome dove (Perry), a retiree in waiting (Paul), a slick Pizza Man (Cain) and a Moderate in the wrong party (Huntsman).

Tonight, with the GOP thinking that the nation was going to ignore this election and had worked feverishly to espouse voter suppression, people stood in lines for hours. From African-Americans in Florida, Pennsylvania and Ohio; to Hispanics in Texas, Nevada, New Mexico, California, and Florida; to the Middle Class across the nation of all colors. The GOP is now relegated to a picture of grumpy old (white) men with a “get off my lawn” visage and vocabulary. They tried to wrap themselves in the Bible while at the same time embracing a candidate who’s religion was labeled cultic less than six months ago by even his most staunchest supporters including Dr. Richard Land, Dr. Robert Jeffress and Evangelist Billy Graham.

Those of moderate voice are not welcome in the GOP and for me, I’m looking forward to watching the circular firing squad commence on talk radio, FOX News, and any media outlet. I look forward to seeing them try to do what the electorate refused to do, try to come up with some nonsensical reason to try to impeach the president, which will lead to a national revolt against the GOP and will make them as powerful as the Whig Party at the next election.

Finally, they had the nerve through so-called “prominent preachers” who aren’t worthy of calling their names, to tell African-Americans and the sons and daughters of the diaspora not to vote. In the words of politicians years ago, “Have you no shame, sir, have you no shame?”  Calling churches and pastors on Sundays and encouraging them to tell their congregations not to vote is the work of demented preachers and pastors.