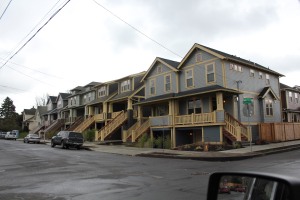 I am a proud son of the Portland, Oregon area. It was in Portland that I learned how to walk, talk, run, and sleep. It was in Portland that I began the process of education at Ockley Green Elementary School, Jefferson High School and attended several schools – United Theological Seminary and Bible College, American Baptist Seminary of the West, Multnomah School of the Bible, and Golden Gate Theological Seminary – all either based in Portland or Portland-based extensions. I began my secular employment there and my church employment there. I learned how to sing in Portland, I learned how to play piano and organ in Portland. I lived with my parents on Borthwick Avenue and then Rodney Avenue. After I was grown, I lived on Vancouver Avenue, Lombard Street, Skidmore Street, and Taylor Street. I fell in love the first time in Portland and had my heart-broken for the first time in Portland. Most importantly, I gave my life to Jesus Christ in Portland, Baptized in Portland, and was called to preach in Portland.

That Portland is now gone.

Gentrification has occurred in a manner that I have never seen before. In the 1940s through the 1960s, a migration of African-Americans came to Portland seeking a better life from their roots in the South. They came from Louisiana, Texas, Mississippi, Alabama, Arkansas, and other states to seek employment in a bustling small town that was primarily known for it’s lumber and maritime industries. Most black people in that area settled in an area called Bagley Downs in Vancouver, Washington, which flooded and most blacks settled in the Albina area (then called Albina, Oregon), inner North East Portland, and St. Johns to the far north of the city. Very few African-Americans lives in Northwest, Southwest and East Portland.

The community was thriving albeit without the full support of the city for necessary services. When I was a child in the 1960s, I remember that nothing was convenient – stores were not like their other locations. Gas stations were far and few between. Shopping for groceries meant going to Tradewell or Fred Meyer or Safeway.  Fred Meyer had two stores – one on Union (now Martin Luther King, Jr. Blvd.) and on Interstate (now Rosa Parks Boulevard). To shop for clothing meant a trip to the Lloyd Center, the nation’s first mall. We had schools that were the pride of our communities – Grant, Jefferson, Roosevelt, and Monroe/Benson for females and males respectively.

However, we rarely had our own radio stations. We didn’t have flourishing restaurants or chefs in the communities. There were three main drags – Union Avenue, Vancouver/Williams Avenues and Mississippi Boulevard. If you had a prescription, you went to the Rexall store. If you were a black female and about to give birth, only one doctor delivered most of the black babies – Dr. Richard W. Franklin at Emanuel Hospital (aka the black hospital). I actually worked with Dr. Franklin in my early 20s at Emanuel.

Something has happened. In the name of Urban Renewal, what were once proud African-American communities are now gone. Homes have been sold to planners and now there is not a trace of the black community in most of the areas. Schools have been closed. Houses torn down. Churches gone. The Wonder Bread bakery where my mom worked for years – gone. Geneva’s Lounge which burned down years ago – not a trace. St. Mark Baptist Church, Mt. Sinai Baptist Church, Providence Baptist Church – now just a memory. Even the site of where Morning Star stood and suffered a horrific fire is now the settlement of homes called “Morning Star Village.”

Bicycle paths line the streets. Street festivals are common place. Bars have increased some 20 fold in the community. Adult Book Stores, Lottery gaming establishments, stores, clothing stores, and the such have moved in and black people have been forced to relocate to “the numbers” which is a 30 to 60 minute drive from downtown Portland. The old neighborhood was less than 15 minutes.

I applaud success but I cannot applaud the displacement of those who built those homes, created the infrastructure and paved the way for those who live in the area today. Housing prices are now astronomical. My parents bought our childhood home on Rodney Avenue for $35,000.  Recently the house was up for sale at over $600,000. African-Americans are being redlined and instead of encouraging them to stay, the doors of the suburbs are now open. It has had a whirlwind affect.

I feel, personally, that this form of gentrification has long term affect on the psyches of those who no longer have a sense of community. The are locked out economically from homes that for generations have housed the men and women who scrubbed the floors, cleared the boats, built the ships, laid the asphalt.

What’s my point? I don’t know if I have one. I’m partially glad to see services that are long overdue and small businesses invading the area. However, the cost may be too high for the livability of African-Americans. Thank God for those who are still trying to bring about a sense of community. The word “diaspora” comes in clear here. Normally, we consider the African Diaspora, when speaking of native-peoples who were removed from their lands.

But there has now been a Portland Diaspora.

I welcome your comments.