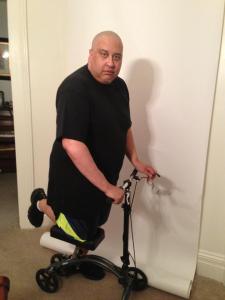 Yesterday, Friday, May 31, 2013, concluded a whirlwind month for me. May is usually graduation month, Mother’s Day, my birthday, my wife’s birthday, a preaching engagement here and there, and of course, ministering at the place where the Lord has planted me, First Baptist Church. But this month has been nothing to call ordinary and Friday was the culmination of one of month, which saw me wheeled into St. Joseph’s East Hospital in Lexington, for the removal of portions of my right arch which had been infected by an infirmity – a melanoma (cancer).

I spent a day in consecration on Thursday. Mostly just being silent and focusing on the Lord, His people and not my personal issues. I noticed that my thoughts were most on what needs to happen at my church during my medical leave than anything else. My secretary, Pat Ross, lost her daughter Mona, who is being funeralized today at the church – so I’ve been assisting her in this process. I had some tasks in my role as Webmaster for the Progressive National Baptist Convention, Inc., that I had to fulfill. But I spent most of the day just being quiet, settling down my soul, and not worried at my medical procedure but asking God for His presence in the operating room, His hand upon my surgeon’s hand, and His assurance to my wife, who has been doing a yeoman’s job of taking care of me, but as her husband, I know she’s under a heavy strain.

We arrived at 6 a.m. and checked in. Then I was taken back to pre-op for preparations and my wife was by my side until I had to go into surgery. They have a great medical staff in the Operating Room at St. Joseph and when I got there my sugar was a little high (190) and my blood pressure was up, so they treated me for both before I went into surgery.

The surgeon removed a larger amount of tissue that she originally planned to. She noticed after they sedated me and finally got the tube down my throat (it was a complication – they discovered that my throat was not as wide as it needed to be – next step: see an ENT) that there were a couple of minuté speckles which was located right by the area, so in a case of caution, she excised them as well.

The process was to remove the skin down to the fat cells and then remove a portion of skin from my groin/hip area to serve as a replacement or graft.  The key is to remove the “infirmed” area and then send it off to pathology. The best case scenario will be at this point, she would have removed everything and there would be no vertical decent of the infirmity. The worst case scenario is that it has progressed vertically affecting either bone, blood or glands. Obviously, we are, and I ask you to, pray for the best case scenario.

Dr. E.K. Bailey preached a sermon that I will never forget. He spoke of Paul’s infirmity that the Apostle described in these terms: A thorn in the flesh. Paul went to the Lord three times and begged him to remove it. Paul’s answer back from the Lord was two-fold: No and My grace is sufficient for you. Dr. Bailey described that kind of infirmity as “Further In and Deeper Down” which is a video on YouTube and a Book Available on Amazon, co-authored by his wife Shiela and daughter, Cokeisha, which chronicles his three-fold battle with cancer. It’s a must read!

I had a complication coming out of surgery that I don’t remember. According to the staff, when the anesthesia wore off, I had a panic attack. I tried to get out of that bed with everything in me, including my IV (not a good thing). They reinserted it, and actually lightly sedated me again. That’s the one thing about anesthesia – it makes you forget what you’re about to go through and gone through (there’s a sermon it this).

I’m very grateful for my sons and daughters in ministry, several of whom came to the hospital that early in the morning to sit with Jessica in the waiting room. And then one of my Kentucky best friends, Pastor Emmanuel Young and his daughters, showed up as well – I had just preached for him on the third Sunday in Greensburg, Kentucky. I will always be grateful.

So the surgery is complete. I’ve got a wide bandage on my hip and my foot was placed in a splint from toe to knee. I have strict orders to (a) rest; (b) stay off the foot as much as possible; (c) move around every hour because there is a risk of blood clots, however my left leg activity will help my circulatory system in my right leg; (d) I’ll be out of the pulpit and daily activities for a few weeks; (e) When I do get around I’ll be on a manual scooter, which I kneel upon with that right leg and I “scoot” with my left leg. OK – here’s the preacher in me – it’s almost like a rolling prayer bench; and (f) I’m on a strict medical regimen. On Wednesday, June 5, 2013, I come to my physician for a follow-up and test results. Again, we’re praying for the best possible results.

My throat is very raspy due to the tube insertion. I’ll have to be on some voice rest for a few days I’m told. Tomorrow will be one of the rare times I’ve not been in my pulpit on a first Sunday in my life (I think I can count them all on one hand) but I’m grateful that Rev. Anna Jones, my assistant, will be preaching at 8 a.m. and one of our local pastors, Rev. Virgil Hill, volunteered to preach for us at 11 a.m., and several other pastors will be coming as well over the next few weeks. It’s good to have friends. Rev. Jones will be handling everything and she is more than capable of doing so.

Indeed, this was a good Friday.

Again, thank you everyone for your thoughts and prayers. This is a journey . . .

Your comments are welcomed.

Posted in: An Infirmity