The Passing of the Torches 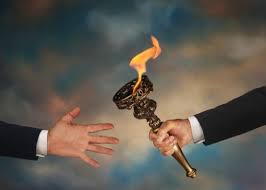 It is customary at the Progressive National Baptist Convention, Inc. that when the Nominating Committee comes forth, they always present the prognosis of elections.  “Next year, 55% of our elected officers will change.” It helps the convention to prepare for the turnover. I’ve come to say that within the next year, it is possible that all four of our traditional national baptist conventions AND the Full Gospel Baptist Church Fellowship will change leadership.

NATIONAL BAPTIST CONVENTION, USA, INC.
Dr. Julius Scruggs of Alabama was elected President in 2009 and several ministers have declared or exploring runs to challenge him in 2013, if he decides to seek re-election.  The election will be held at their annual session in New Orleans in 2014.

NATIONAL MISSIONARY BAPTIST CONVENTION OF AMERICA
The NMBCA has actually been operating without a President since the death of Dr. C.C. Robertson of Dallas. In a controversial move, the Executive Board decided to postpone the election until the annual session next month in San Antonio. The current Vice President, Dr. Nehemiah Davis, is acting president and is being challenged for the post by Rev. Dale Jay Sanders, Sr. and Dr. Samuel H. Smith, Sr. of Louisiana and Texas, respectively.

PROGRESSIVE NATIONAL BAPTIST CONVENTION
Dr. Carroll A. Baltimore, Sr. is the current, tenured President and will complete his two terms in 2014. As of this writing, the only declared candidate is Dr. James C. Perkins of Detroit. At least four men are running for the office of 2nd Vice President including a layman. Their election will be in Fort Lauderdale, FL.

NATIONAL BAPTIST CONVENTION OF AMERICA, INC. INTERNATIONAL
Dr. Stephen John Thurston of Chicago, IL has served since 2003 and will lead the convention into Memphis for the 2014 annual session. At present there is at least several declared candidates: Dr. Samuel Tolbert of Louisiana, which means that for the first time in NBCA history, a President will seek re-election against a Vice President; and Dr. George Brooks of Nashville, who has served as Congress President.

FULL GOSPEL BAPTIST CHURCH FELLOWSHIP
Bishop Paul S. Morton, Sr., who is now the leader with more tenure than all four of the traditional convention presidents combined, has lead FGBCF since 1994, meaning that he has 19 years of leadership. He recently announced the name of his successor – Bishop Joseph Warren Walker of Nashville, who will begin his tenure in 2015.

It will be interesting watching developments of this passing of the torches.