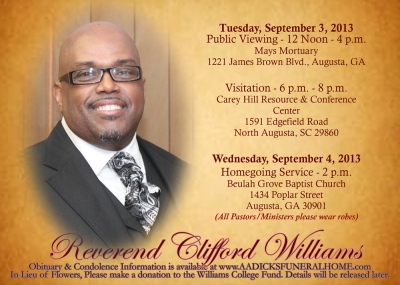 I’m saddened to report of the homegoing of my dear friend and brother of over 15 years, the Reverend Clifford Williams, pastor of the Carey Hill Missionary Baptist Church of North Augusta, South Carolina, who passed suddenly on yesterday morning, August 29, 2013 at the age of 50.

I had the privilege of watching Clifford (excuse my commonality, but it’s like discussing my own brother) and his ministry soar in North Augusta. He served Carey Hill for two years as Assistant Pastor and then after the resignation of the pastor, the Church called him to be their pastor in January 1993 and installed on Easter Sunday 1993.  At that time the church had only one location, in Clarks Hill, South Carolina. Under his visionary leadership, the Church grew by leaps and bounds and mainly by faith.

By faith, the Church purchased computer equipment, two new vans, two new HVAC units, a public address system, the parking lot paved and a new church sign installed. They padded the pews, choir robes purchased, sanctuary re-carpeted, remodeled the pulpit and installed a handicap restroom. The church was doing all of that while transitioning to become a “full time” church having worship every Sunday.

He led them into the purchase of land in North Augusta, where they build the Carey Hill Resource and Conference Center, which houses two of their services each month. He developed and created the Carey Hill Development Corporation and was able to embark on community activities such as education, training, wellness and entrepreneurship.

Clifford’s biggest asset was his personality. I marveled at his interaction with his members – from youngest to oldest. He was bold in his leadership but kind in his pastorship. He was the kind of pastor that drew people – even if you weren’t his member, you knew Rev. Clifford Williams.

He was a family man. He married Susie Trammell and they had three children and she suddenly went home to be with the Lord. He was left to raise his family, but he did so with the help of a supportive team – his mom, his dad, his family and his wife’s family of which he counted them and they counted him still as family.

He was a preacher and also he knew preaching. He was fluid in his conversation – one minute you could be talking about preaching and the next minute, he was cracking a joke. He would laugh at your jokes and his favorite expression to me was “Houston, you’re CRAZY.”  His laugh was contagious and you couldn’t get a good read on what he was thinking when he said, “Oh, Lord….”

Clifford preached at First Baptist Church for my Installation. It was a no-brainer. I wanted my brother there and my pastor there. My brother (Clifford) preached us crazy at 11 a.m. and then my pastor preached with power at 3 p.m. Clifford served at the worship leader. I had been his guest at Carey Hill for many years doing annual days and Revivals and I looked forward to the fellowship every year.

He was a serious trainer of preachers and he took serious the call upon his life. He was called to the ministry and preached his first sermon in 1991 at the Summer Grove Baptist Church of Williston, South Carolina, where he was ordained in 1992 prior to his call at Carey Hill.

He served as a denominational leader, pastor, father, husband, son, brother, corporate CEO and owned a business, “Affairs to be Remembered,” a catering and floral business, operated from the confines of the Resource Center.

I remember our talk after his dad passed away several months ago and he loved his dad. My father had passed away about 20 years ago and we talked about the pain of death and he said, “Houston, one day somebody is going to call me about you or you about me.”  He’s right. You’re here today and you could be gone tonight.