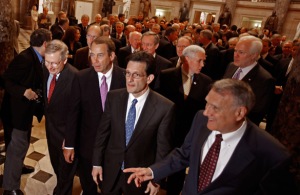 It’s 11:30 p.m. on Monday evening and in 30 minutes, the United States of America will effectively shut down the government, excluding all essential personnel and programs because of one thing – dysfunction.

Truth be told, the GOP is celebrating the shut down because they would do anything – and I mean anything – to hurt, embarrass, cripple or destroy the Presidency of Barack Hussein Obama. After legislation was passed in the House and the Senate, approving President Obama’s signature legislation, and then it was upheld by the Supreme Court, a band of terroristic hijackers, all coming from the GOP are trying to circumvent law. The Budget does not pass the law, the budget approves spending for existing law. The Affordable Care Act is not pending legislation – IT IS THE LAW – and to not fund it is to overrule EXISTING LAW.

Admittedly, this kind of brinkmanship does damage to the nation. The GOP is not doing this to buffet up a law – this is being done to stick a proverbial finger in the eye of the President of the United States. This has never been done. No government shut down has occurred in the 200 plus years of this Republic – to hold up an entire budget because a handful of Representatives seek to destroy EXISTING LAW after they could not stop it in legal methods.

Never in my 53 years of life have I seen such a heartless group of politicians. It makes you wonder if the Tea Party would like to take us all the way back to 1776 – when the government was male-dominated, women were silent, slaves were in the fields, and land was being confiscated under the doctrine of “manifest destiny.” According to these Tea Party activists, they aren’t interested in cooperation and governance – they are interested in one word – No.

I will agree that the deficit is a problem but they have bad memory. President Obama inherited one of the worst economies since the Great Depression, which was fueled by Congress’ reckless pursuits in the Middle East without providing funding for several wars. The President cannot and has not wrote one check – but the check writers blame him for everything knowing full well that their own malfeasance under President Bush helped precipitate this fiscal mess.

I hope that the GOP is against the President for political reasons and not racial reasons but I cannot help but to remember that on the day he was initially inaugurated in 2009, the GOP met to devise a “one term President” strategy which was led by Kentucky’s  senator, Mitch McConnell. Never in the history of the Republic has this occurred. They have, led by nomads like Orly Taitz, Rush Limbaugh, Sean Hannity, James David Manning, and other mouthpieces, who have attacked the President from his ethnicity to his citizenship to his birth certificate and even have gone as far as to accuse President Obama of working for the CIA in his younger years as if it was something seedy and ungodly, while forgetting that the CIA is part of THIS government.

The GOP is about to make the same mistake made during the Newt Gingrich years, however, this time, to exclude 40,000,000 million Americans from Health Care Insurance which will benefit local municipalities, eliminate making Emergency Rooms as Primary Care offices, and will allow those with pre-existing conditions and children to enjoy what the same GOP House and Senate members enjoy – health care.